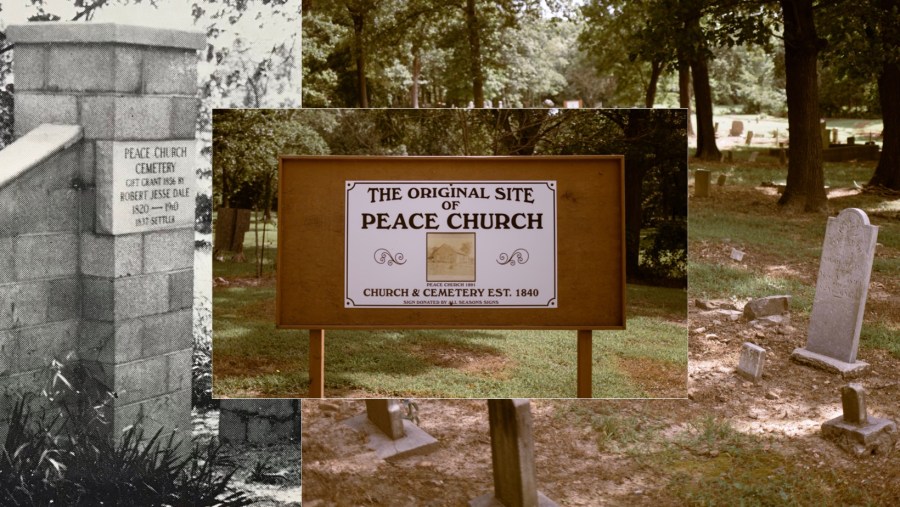 JOPLIN, Mo. – Established in 1841, Peace Church Cemetery is the second oldest cemetery in Jasper County. Peace Church, established the year before, disappeared board by board over the years. Now, all that remains are the burial grounds. Before Joplin was established in 1873, Peace Church Cemetery was located in the Lone Elm community of about 2,500 residents. The cemetery was established by generations of families in the area who needed a forever resting place for their loved ones and wanted to stick together. "Everybody just kind of picked their own area. There was never a charge here, it's still that way... Nobody disturbed it, nobody bothered it. People would know 'this belongs to so and so,'" said Jim Beeler, Sexton of Peace Church Cemetery Association. As many as 2,000 southwest Missouri pioneers and family members are buried at Peace Church Cemetery, including veterans from the Civil War, Spanish-American War, both World Wars, the Korean War and the Battle of Carthage. A History of Peace Church Cemetery, 1961. Although the cemetery is mostly built on family plots, the first individual buried at Peace Church Cemetery was a black child who worked on a salt freighter. On a journey back from St. Louis to Oklahoma, the boy became sick. "It was on one of those return salt hauls that one of his Negro employees became ill," A History of Peace Church Cemetery, 1961. The boy died as they arrived at the Lone Elm area. They found a spot at the top of a hill in Peace Church Cemetery to bury him. No name was recorded and his grave was unmarked. In 1846, the first recorded burial at the cemetery took place: local Sarah Tingle, who died during childbirth. Because it doesn't cost to use the cemetery, many unknown and unmarked burials took place throughout the years. "Burials of later years have been mostly from poorer families who chose Peace Church Cemetery because its grave 'rights' were free. Most of the new graves are poorly marked," Old Peace Church and Cemetery by Dolph Shaner, 1942. But the cemetery's infamous burial is that of Joplin native Billy Cook, who was buried just outside of cemetery grounds. In 1950, Cook murdered six individuals across six states. Two years later, he was executed in California and sent to Peace Church Cemetery, where he was buried in an unmarked grave. Up until 2003, individuals were still being buried at Peace Church Cemetery. Revitalization As time passed, the cemetery returned to nature, unmaintained for many decades. Joplin Public Library In 1956, the Peace Church Cemetery Association was established by Lillian Geer to keep up with the historic site. In 2015, the association was reenacted and the cemetery's revitalization began. Even just a few years ago, all that could be seen at Peace Church Cemetery was overgrowth. Some areas couldn't be accessed and grave stones hadn't seen the light of day. Now, the cemetery is maintained regularly and fully open. To this day, unmarked graves are still being located and individuals who have passed on are being recognized. That occurs when one marked grave is surrounded by sunken in spots, indicating that there are more graves that were left unidentified. Because these are usually family plots, the name on the marked grave tells the Peace Church Cemetery Association what to research, thus determining the family members buried around the marked grave. "We may not know the succession of which one is in which, but that doesn't make any difference at this point in time. We know that they're all right there," explained Beeler. Beeler makes flat grave stones with the individual's name, their birth and death date, and their relation to the family – depending on what information is available. For the graves that are unidentifiable, Beeler makes stones marked "grave." By the time all the unmarked graves are marked, Beeler will have made close to 300 grave stones. To organize the layout, Beeler split the cemetery into grids, designated by markers on the ground and digitized in a computer system. Now, if someone is trying to locate a specific grave, it can be looked up digitally and pinpointed on the map. Although so much work has been done, the effort doesn't stop. The group is always seeking volunteers to mow and weed eat individual grids. "We're still needing volunteers... They take one area and that's theirs to maintain every two weeks. They come out anytime during the week they want to or on the weekend and cut that area," said Beeler. Each grid is assigned to a volunteer. Upon adopting a grid, a sign gets placed on the grid with the volunteer's name. Maintaining the overgrowth of your grid takes about one hour, equally about 14 hours of volunteer work a year. "We just want people to say 'hey, I made a difference out there at Peace Church Cemetery,'" said Beeler. On top of regular maintenance and marking graves, the group is also still filling graves and repairing and straightening grave stones. The importance of keeping up with this historic cemetery lies in maintaining the memory and integrity of the dead. "Everybody's deserving of recognition. We live, we're recognized. When we die, we still need to be recognized. We're part of somebody's family and everybody is deserving of of that recognition," said Beeler. To become a Peace Church Cemetery volunteer, message its Facebook page, Peace Church Cemetery.
Read More

Off of Main Street in Erie, a business was celebrating the return of one of it's...

One group in Southeast Kansas isn't letting the weather...

Off of Main Street in Erie, a business was celebrating...

Joplin residents are teeing off to raise money for one...

Texas officials from the state, city and even neighborhood level are calling for...

Critical Race Theory Is Being Institutionalized Throughout...

Americans are right to fight back against the racial fanaticism now invading American...

“Biden Has Had More Attacks on Syria than He’s had Press...

Biden declares ‘the United States is back’ during address...

Biden reasserts US leadership while praising service of US armed forces

Small-time actor Zach Avery has been arrested for allegedly participating in a Ponzi...

Leaked internal documents from the Disney corporation show an insane level of far-left...

B-52s again fly over Mideast in US military warning to...

A pair of B-52 bombers have flown over the Mideast, the latest such mission in the...

April’s cold snap: What it means for dormice, snakes, spring...

How are plants, animals and humans responding to the frostiest April for over 60...